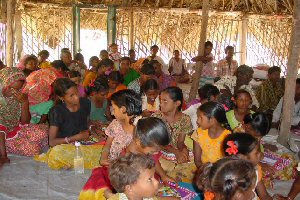 The FIOH Fund supported a relief programme that was established by HEARTS in November 2013 to help victims of severe cyclones affecting Andhra Pradesh.  A major camp was conducted on 22 nd November which benefited 165 children and 74 women in the tribal colonies of Krupa Nagar and Venkata Reddy Nagar.
The beneficiaries received food supplies – rice, Dal, wheat, oil, sugar and kerosene for cooking.
All children received note books and stationary.  All the children and adults were examined by a doctor for various illnesses and given medicines.  The main problems were fever, cold, cough, body pains, skin allergy and leanness.

There were three cyclones in this month namely Phi-leen, Helen and Lehar.   Hundreds of families were evacuated and a large number of cattle and poultry were killed.  All schools and offices were closed for two days.  HEARTS supported the most needy and neglected people in Bapatla tribal colonies.  The people here are absolutely poor and don’t even come to town for work.  Blankets, childrens clothing and a temporary roof for the school was also provided. 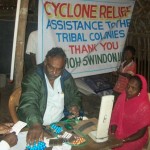 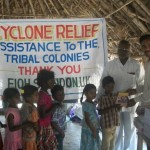