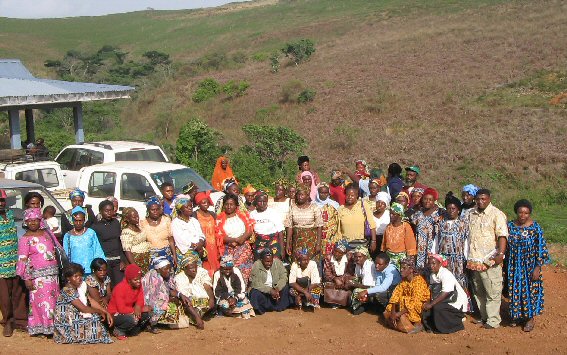 Strategic Humanitarian Services (SHUMAS), a Cameroonian Development NGO, after working on its own for sometime, considered possible networking and collaboration with northern NGOs who shared common objectives and methods of approach to development. Between 1997 and 1999, the General Co-ordinator of SHUMAS, Stephen Ndzerem and the President of Plant a Tree in Africa (PATIA)/Co-ordinator of Future in Our Hands Education and Development Fund UK, Mike Thomas, were involved in some intensive correspondence. 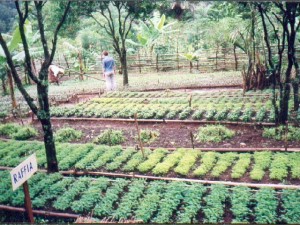 One of the issues they discussed was how to seek a sustainable solution to the adverse effects of eucalyptus plantations on water sources and farming areas. Women were the principal victims.
In 1999 Mike Thomas visited to carry out a site assessment and provided £500 from PATIA (matched by SHUMAS) to establish a nursery for 40,000 tree seedlings (10 species) and fell several thousand eucalyptus.
Because of the encroachment of the trees into existing and potential farming areas, many women have to walk long distances (often 15 miles or more) to find new areas to farm. They will then live in temporary self-made huts for 2 to 4 weeks before returning home with whatever they can carry on their heads.  Many will carry babies or take young children with them.  People in general, usually women and children, have to walk further and further each year to fetch water.  A summary of the project and its outcomes are shown below.
Information gained from the pilot project was used in support of an application to the Big Lottery Fund to fund a large project named the Eucalyptus Replacement Project .
A 10 page brochure summarising the first phase of the project can be seen here:
CAMEROON – EUREP I – BROCHURE
Since then SHUMAS has established partnerships with AidCamps International and Building Schools for Africa both of which have resulted in a comprehensive school building programme involving a partnership between local communities and the schools’ parent teacher associations.
A Buildings Schools for Africa report can be seen here:
BUILDING SCHOOLS FOR AFRICA Newsletter October 2014
SHUMAS is now a well respected organisation in the area and has established many projects, including those summarised below, which have improved the lives of poor people in both urban and rural areas. More details can be seen at the SHUMAS web site:
STRATEGIC HUMANITARIAN SERVICES 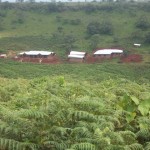 Another inspirational development has been the establishment of an Organic Farming Training Centre in the NW Region near Kumbo.
Details of the operation of the Centre can be seen in this 34 page report: BIOFARM

Primary health care
A partnership with Spreading Health [Founded by Dr Peter Hearn] is facilitating primary health care training for people in the rural areas.  This has included a scheme to sponsor local village candidates to train for three years at the St Louis Higher Institute of Health & Biomedical Sciences in Bamenda (the capital of NW Cameroon). 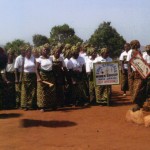 During his visit in 1999, SHUMAS gave Mike Thomas an opportunity to present his idea for establishing savings and credit cooperatives to about 300 women.  There were some initial setbacks but before 2000 more than five co-operatives had been trained and became fully operational.
By 2014 sixty two autonomous co-operatives all of which have again come under the single umbrella called Future in Our Hands Womens Credit Union Cooperative- Cameroon.
The FIOH co-operatives are quite different from conventional co-operatives. FIOH concentrates on building the capacities of grass roots women through encouraging the spirit of sharing, co-operation and fellowship, rather than on too much external dependency and a quest for individual material gain. 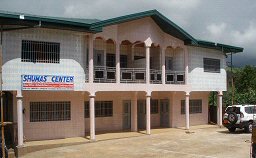 In February 2009 SHUMAS started the construction of an inspirational new building that combined facilities for both staff and vocational training for disabled people. The building was completed later that year. The SHUMAS head office combines facilities for administrative staff with those providing vocational training for disabled people. The object is to provide disabled people with the means to become economically self-reliant and the ability to effectively participate in the development of their communities.

The objectives of the Centre are to: 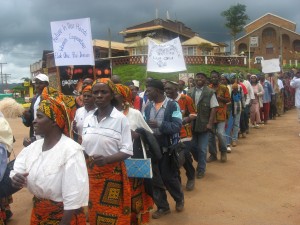 The project was launched in 2000 and was supported by all sections of the community and government authorities and provided the framework for the introduction of new ideas to the women.
The womens network was to play an important role in the day-to-day management of the project which involved the felling of 1,017,200 eucalyptus and the raising of 2,624,000 mainly indigenous African trees (60 species) carried out in two phases between July 2000 and October 2008.
The projects cleared about 463 ha of eucalyptus trees resulting in the recovery of 105 springs and 140 water taps during the dry season. Over 9,000 women who had previously walked long distances to farm and collect water, were able to farm close to their homes.
Statistics in 6 rural health centres and 1 hospital recorded an average 27% reduction in water born disease during the life of the project. It was estimated that an additional 5,153 children were able to go to school because of the increase in family incomes resulting from the projects.
The local authority and many individual farmers copied the example of the project and hence the figures shown above are an underestimate of the project’s impact.